Arrowhead 135 and The Gift of The Broken Pedal


It is recognized as one of the world’s “50 Toughest Endurance Challenges”. The Arrowhead 135 offers athletes the opportunity to test themselves in one of the coldest locations on the North American continent.  Temperatures have been recorded as low as -40F. For this years version, temperatures would be nowhere near that, which, ironically is not a good thing at all. As temperatures dip well below zero, the Arrowhead trail gets very firm. Temperatures above freezing many times brings fresh snow and mashed potato like trail conditions. The race is a true endurance and survival test. One cannot simply sign up for the AH135. Show up here unprepared or with not enough experience and you can die. To get into the race, you must be able to prove yourself worthy. If you have not finished other winter 100 milers or other events deemed worthy by the race director, you will not be let in. The required gear list shows that this is not a place to cut your teeth. Race director Ken Krueger makes it clear, “If things go bad out there, figure it out. Unless it is a medical emergency, you are on your own. Pull out your sleeping bag, bivvy, eat, drink and either continue on or get yourself back to the previous checkpoint.” Every racer must carry the required gear with them start to finish. This gear list includes  a -20 degree or lower sleeping bag, a bivvy sack, stove, gas, sleeping pad, 3000 calories and a safety whistle (in case you are too weak to holler for help at the snowmobile coming to rescue you.)


This race captured my imagination. I’ve watched in amazement “Among the Wild”, the movie documenting the 2013 Arrowhead and the stories of the athletes who dared to tame the beast. Every single person that toes the line at Arrowhead has earned the right to do so. There is no “buy in”. One cannot simply head to their local outdoor retailer, buy a bunch of fancy gear and then hope some guide can see them safely to the summit or in this case, the finish line. Time and time again it is made clear. When the man yells “Release the hounds!!” and the gun goes “Bang”, YOU ARE ON YOUR OWN.


I arrived in International Falls, making the drive from Des Moines, Iowa, on Friday evening. The race would start three days later. Great friend Jarred Harkin joined me and was equally stoked to be on his adventure as well. He’d be spending three days on the frozen waters, testing his skills against the local walleye and northern pike population. He had created a badass ice fishing rig and was ready to give it a go on the big lakes of northern Minnesota. We got a good meal in us at the Chocolate Moose and got to bed, anxious for the sun to rise so our adventures could get underway. The alarms went off well before sun up and we set off to drop Jarred off. He was as excited as I have ever seen him. Watching him set off across the lake pulling his 200 plus pound sled across the ice was super cool. He had also earned the right to be here, honing his skills and perfecting his set up before coming up to the great north.


Heading back to International Falls, I gave good friend Joe Stiller, from South Dakota a call to see what time we wanted to meet for our pre-ride. Joe is as knowledgeable a winter rider as there is anywhere. He had been kind enough to share that wisdom with me the year before, prior to my first Tuscobia 150.  The game plan was to meet up, drive out to the first checkpoint and test the trail conditions for 15 miles or so. It’s easy to show up at these races a day before, get your gear checked and just race but it is also risky. Trail knowledge is HUGE and having an idea what you are in for is invaluable.  Being able to answer questions like, “hilly or flat, soft or firm, best tire pressure”, before you start the race is a very good idea. The race will give you all you can handle. I wanted to eliminate as many variables as possible before the race so my mind could concern itself with one thing, finishing.


The week before, International Falls had got its first real taste of winter. Temperatures had dropped to -20 for many days in a row. It was our hope that the trail would still be firm and fast.  It was…..and it wasn’t. Leaving the convenience store at Gateway (which would be CP1 at about 35 miles into the race), the trail was packed solid and quickly my mind thought, “wow, this is a breeze”, but I knew better than to believe the course would all be this way. Those types of thoughts are VERY dangerous. Better to expect the worse and to enjoy the best. It is my belief that the mind causes far more DNF’s at these events than the physical. The first five or so miles were nice. The scenery in Voyageurs national forest was spectacular, the trail was fast and I caught myself smiling many times. I was on the Arrowhead Trail, a dream was being realized. Joe’s idea to do 7.5 miles was wise. The trail started to gain some hills and seemingly, in an instant, conditions changed. I can’t be sure why. Perhaps the last 5 miles had seen some logging traffic which had packed it down. Whatever the case, the bike was sliding under me now and the pace slowed a lot in the now soft snow. Turning around after 7.5 miles, I decided to not follow the tire tracks, which provided a bit more packed snow, but rather ride the very outside edge of the trail just to see what would happen. It was a decision that would pay off huge during the race. It turned out that the snow there had remained frozen. Perhaps it had been a bit more sheltered from the sun, or maybe it was due to the snowmobiles not turning it up. Whatever the reason, if you didn’t mind the occasional swat in the arm by a tree branch, this was the line to ride.

I thanked Joe and his wife Tina for the wonderful ride and we parted ways for the day. I was off to Bemidji to grab a SPOT tracker. Heather Wince and fellow bike packing junkie Steve Fuller had suggested it strongly earlier that morning. I had rented one for the 2015 Tuscobia 150 and had enjoyed being connected to friends watching and there was also a HUGE safety component to it. If the sh*t really hit the fan, it allows for a much easier rescue if the emergency folks can pinpoint your location. And in this place.....anything was possible.... 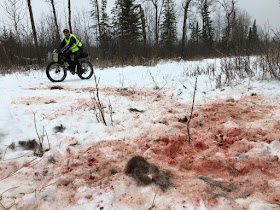 Hope you enjoyed part 1 of this three part blog. Please subscribe and follow along for the rest of the story and what I hope will be many, many more adventures.